I am pleased to share the news that UCI became the second University of California campus to receive a prestigious STEMM Equity Achievement (SEA) Change Bronze Award from the American Association for the Advancement of Science (AAAS). The AAAS honor recognizes the self-assessment and tangible actions pledged by colleges and universities to promote diversity, equity, and inclusion in the fields of science, technology, engineering, mathematics, and medicine. 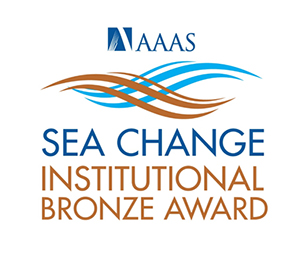 Organized by the Office of Inclusive Excellence, UCI became a charter member of the SEA Change community earlier this year and joined the bronze awardee circle with UC Davis in 2020. The bronze award is the first tier of continuous improvement plans that may lead to silver and platinum awards in the future. Peer reviewers considered the institution’s self-assessment about key aspects of student, faculty, and campus experiences and achievements, as well as strategic efforts planned by UCI to advance its inclusive excellence during the next five years.

AAAS is one of the largest scientific professional associations in the world and the organization honored the individual scientific achievement and contributions of nine UCI faculty as fellows last November. The AAAS recognition coincides with the upcoming 20th anniversary of the implementation of a University-wide equity advisor model to promote diverse recruitment and retention of faculty. The equity advisor model was originally developed through an Institutional Transformation grant from the National Science Foundation to increase the participation and advancement of women scientists and engineers in the academy. UCI leadership institutionalized the model in 2006 after the grant ended and expanded its focus to include racial and ethnic diversity, as well as gender equity.

I appreciate all who have contributed to this honor and look forward to our continued progress toward a culture of inclusive excellence at UCI.