Professor is fifth School of Education faculty elected to Academy.

The National Academy of Education (NAEd) on February 20 elected UCI School of Education Professor Mark Warschauer to membership in the Academy. 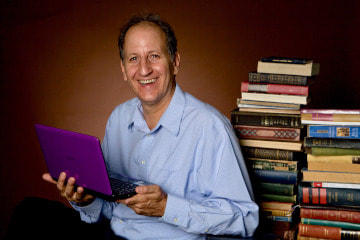 A leading expert in digital learning and founder/director of the UCI Digital Learning Lab (DLL), Warschauer is one of 15 “exceptional scholars” elected to the Academy.

Warschauer said he was “humbled and honored” to join such an esteemed group.

“Election to the National Academy of Education is one of the most prestigious honors a faculty can achieve in his or her career, and Mark is well deserving of this commendation,” said Richard Arum, dean and professor of the School of Education. “His research and scholarship is not only cutting-edge, but has also proven to be a great boon to our communities and to students of all ages and backgrounds.”

“These diverse scholars are at the forefront of those who are improving the lives of students in the United States and abroad through their outstanding contributions to education scholarship and research,” said Gloria Ladson-Billings, president of the NAEd, of the new members.

Warschauer has been a leader in the field of digital learning—with a focus on the needs of diverse learners—since the early 1990s. As a Fulbright scholar in the Czech Republic in 1993, he developed the first online discussion forum in the world for English language learners. As a doctoral student at the University of Hawaii, his research helped redefine the field of computer-assisted language learning to focus on the new kinds of language and literacy developed in online environments.

His subsequent research on the relationship of digital access and skills to social and educational equity—based on his own field research in Egypt, Singapore, China, Brazil, and the United States—was published in his widely-cited MIT Press book, Technology and Social Inclusion. He later made similarly important contributions to understanding the benefits and challenges of implementing individual use of laptops in schools, both in the U.S. and around the world.

Today, Warschauer’s scholarship encompasses digital learning, language and literacy, STEM education, and learning analytics. As director of the DLL, Warschauer and his team are addressing the needs of students and educators in preK-12 and higher education.

In preK-12, his team is developing and implementing a computer science curriculum that meets the needs of the nation’s English language learners, partnering with PBS Kids to develop an interactive version of a new children’s science television show that incorporates a conversational agent, supporting innovative use of technology in a charter school supporting full inclusion of children with special needs, and using text mining to analyze secondary students’ writing.

Looking to improve learning outcomes in higher education, the DLL is carrying out experiments to improve online learning and analyzing clickstream data to better understand the undergraduate student experience. The DLL team is also exploring new approaches to data mining, machine learning, and learning analytics to analyze the learning and educational data that result from use of new digital tools.

“Early in my career, I recognized the tremendous potential of digital media to either amplify inequality or – if properly deployed – help promote educational and social inclusion,” Warschauer said. “I have dedicated my career to better understand how the power of new technologies can best serve this latter goal, and thus benefit diverse learners around the world.”

Warschauer currently serves as a principal investigator on eight grants, totaling $17.6 million. He has published more than 200 papers and 11 books, including, most recently, Learning in the Cloud: How (and Why) to Transform Schools with Digital Media and Japan: The Paradox of Harmony. His work has been cited approximately 34,000 times, making him one of the most influential scholars of digital learning in the world.

Warschauer joined the UCI Department of Education in 2001. He led the establishment of UCI’s highly-respected PhD in Education program and helped recruit senior faculty including Vandell, then-chair and founding dean. He worked closely with Vandell to establish the innovative undergraduate major in Education Sciences, first of its kind in the nation, and advance the department to School status in 2012. He later served as associate dean from 2012 to 2015 and interim dean from 2015 to 2016.

A first-generation college student, Warschauer worked as a community organizer for the United Farm Workers union upon graduating college. He then began his educational career as a Spanish bilingual math and ESL elementary school teacher aide and high school teacher in San Francisco public schools. He later taught and conducted research at Moscow Linguistics University, Charles University in Prague, and Waseda University in Japan, and served as educational technology director of a large educational reform project in Egypt.

About the National Academy of Education

The National Academy of Education (NAEd) advances high-quality research to improve education policy and practice. Founded in 1965, the NAEd consists of U.S. members and international associates who are elected on the basis of scholarship related to education. The Academy undertakes research studies to address pressing educational issues and administers professional development fellowship programs to enhance the preparation of the next generation of education scholars.